Is your honey ready to harvest?

Ideally, the frames are completely capped. In most cases this means that the honey is ready. But often there are some uncapped areas on the frames. Honey that isn't fully cured can ferment, so it's important to make sure it's dry enough. You can check this most accurately with a refractometer. A rough field test of whether the honey is ready for harvest is to see if you can shake any nectar out of the uncapped cells. If so, wait a bit longer, and check again. 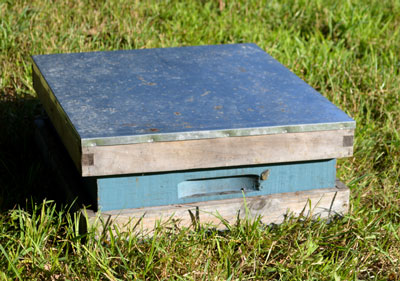 A super sandwiched between a pair of covers to keep the bees out while harvesting other boxes.

If your bees have done well this year, you may be getting ready to harvest some honey. Like most things in beekeeping, there are multiple ways to remove bees from your supers.

Honey harvesting can be hot and heavy work, but consider the effort the bees have already made to make that honey. A pound of honey may have needed as many as 2 million individual visits to flowers and required more than 50,000 miles of flying. Each fully-capped medium frame of honey may contain 3 to 4 pounds of honey. A 10 frame super may yield as much as four gallons of honey.

Prep work before beginning any method of honey harvest

Before you start, set up a way to secure the frames, or boxes, once they are free of bees. You don't want to go to the trouble of getting bees out of the supers, only to have them get right back in. Keeping the bees out will also go a long way toward preventing robbing during the harvest.

This protection can be a tightly closed nuc box if you are planning to harvest just a few frames at a time. If you plan to remove whole boxes, you should have a bee-tight base and a cover for the stacked boxes. An upside-down telescoping cover used as a base and another cover for the top is the best choice.

Three ways to clear the bees out

1) Remove the bees manually by shaking or brushing. This is the lowest-tech way, and best suited for when you want to harvest only a few frames at a time, for whatever reason.

In newly-started colonies there is always the question of whether the bees will make enough for themselves to live on during the winter and still, perhaps, yield a frame or two for harvest. You can hedge your bets by removing a few frames that are capped, and providing additional new ones to see if the bees and the late season flow will combine to get them drawn and filled in time. If they do, then the removed frames can safely be harvested in the first year. If not, the removed frames can be returned to the hive later in the fall to make sure the bees have the stores they need for safe wintering.

Manually clearing off the bees is easy for a frame or two. But after a few frames have been taken, the bees will figure out what's going on and often get more assertive about their claim to their hard-won stores. So, make sure your protective clothing is thoroughly buttoned up.

Wrap each frame in plastic film. A good brand is Glad Press 'n Seal, which will stay stuck to itself even during freezing.

Select a frame, and holding it firmly over the open hive, give it a sharp vertical shake (or two) to dislodge most of the bees. Remove the remaining ones by using a brush (gentle little flicks, using just the tips of the bristles, not a broad sweeping motion), stroking the surface with a loose bunch of soft grass, or your fingertips. While carrying the frame over to the collection box, keep shaking the frame. Then pop the clean-as-possible frame into the collection box and close it up tightly. Repeat until you have taken all the frames you want to take. 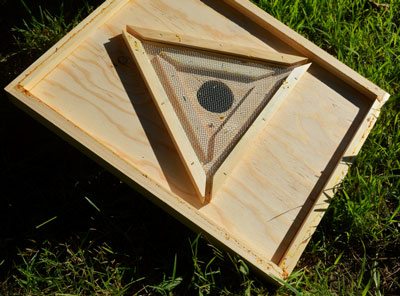 Underside of triangle escape board showing the maze. 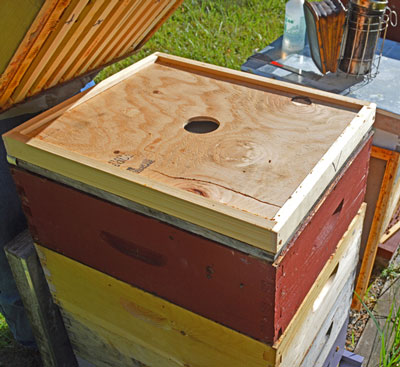 Top surface of the triangle escape board in place on the hive; preparing to set the super down on top of it. 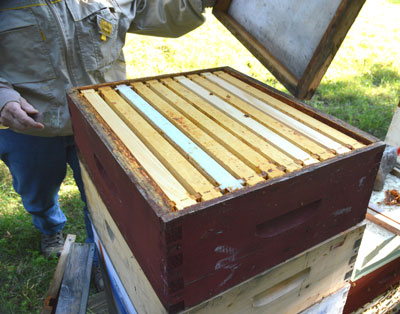 After the fume board is removed, bees will be out of the uppermost super.

After closing the hive up, carry the collection box even farther away, and reopen it and shake or brush the remaining bees out.

Any frame that is removed from the bees’ vigilant care must be extracted within a day or two in order to prevent damage from wax moths and small hive beetles. The only safe way to store unextracted frames with honey for longer than that is to freeze them. Freezing kills the nearly-invisible eggs of insect pests. After 72 hours of below-0 degrees F, the frames can be removed, thawed, and carefully stored at room temperatures in insect- and mouse-proof containers.

2) Use a triangle bee escape board. This clever tool allows you to trick the bees into leaving the supers in the evening, and then not be able to find their way back through the maze-like design of the exit. This method requires 24-48 hours to work (it works fastest during cool nights, but takes longer when the night temps remain high). It is harmless to the bees, and easy to manage. It has the advantage of removing the bees from multiple supers at once. It also keeps the bees calm during the process.

If you don't use queen excluders, and have supers with both brood frames and capped honey, the bees won't abandon the brood. So, you may have to temporarily separate the brood frames (in another box) from the purely honey ones before using the escape board.

To install the escape board, lift off the supers you want to clear, place the bee escape board with the small circle facing upward. Stack the supers back on. If you have a notch in your inner cover, pull the outer cover tight against the notch to seal it up (or tape it shut). This will keep bees from re-entering through the inner cover. Check on the progress after 24 hours. Allow up to 48 hours if the nights are warm and muggy. Do not leave the board on indefinitely – the bees will figure out the maze eventually, and in the meantime any wax moths or small hive beetles will be uncontrolled by the vigilant bees. If your hive is particularly crowded with bees, it is sometimes helpful to install an empty box (with frames) underneath the escape board to give the bees somewhere to go when they leave the supers.

When the supers are cleared of bees, remove them and the escape board, and reassemble the hive.

3) Use a fume board to drive the bees out of the super. Fume boards are used with a very stinky or a bee-avoidant product (either Bee-Go or Bee Quick) to drive the bees out of the supers. The advantage of this method is that it is fast, working in only 5-10 minutes per super. The chemicals used are so noxious to the bees that they will quickly flee down into the hive to escape. Even though the chemicals are overwhelmingly-offensive to the bees, they are safe to use and will not actually harm them.

To use a fume board, squirt a modest amount of the chemical on the felt pad on the under surface of the board. Remove the outer and inner covers and place the fume board – felt side down – over the uppermost super. In 5-10 minutes, the top super (and sometimes the one below it) will be nearly free of bees. Remove it, and repeat with the next box below. Continue down through the remaining supers if you have more that you wish to harvest.