Bees don’t just wake up one day and leave — and this is good news for beekeepers wondering how to keep honey bees from swarming. The event is preceded by a series of stages that prepare the hive, the bees that stay behind, and the bees and queen that will leave. This lead time offers beekeepers some opportunities to reduce the likelihood of a swarm or avoid it altogether.

What causes honey bees to swarm?

When conditions in the hive or colony are right, it triggers roughly half of the bees to separate and start a colony in a new location. Bees trying to swarm isn’t necessarily a bad thing — it usually means the colony is healthy enough that they want to try splitting in two to reproduce. To prevent your bees from swarming, you must understand some of the key swarm causes.

Inspect your hives for signs of swarming behavior

To prevent swarming, monitor your hives — especially in the weeks leading up to swarm season. When you inspect your hives, check for these common swarm warning signs:

How to keep bees from swarming

Swarm preparations span weeks to months. If you’re keeping an eye on your hives and know what actions to take, you may be able to stop the swarm. Explore these best methods for preventing your bees from swarming.

The earliest anti-swarm tactic begins the summer before: Introduce a young queen to the colony after mid-summer. Queens emerging from their first winter seem to be less likely to have colonies that swarm. However, older queens are not guaranteed to swarm — and newly made-up nucs and packages have been known to swarm. So, many beekeepers choose not to requeen on such a rigid schedule, preferring to keep a healthy and vigorous queen in place rather than rolling the dice with a new one.

Space matters in the hive

Making adjustments to the brood nest area is the earliest springtime anti-swarm tactic. Ensure your supers and brood nest boxes have a generous amount of space and plenty of airflow. Reversing the position of your brood boxes — and adding an additional box, if necessary — creates space in the brood nest and encourages the colony to expand upward instead of swarming.

Consider temporarily increasing the number of brood boxes in the spring, providing you can do so with mostly drawn comb. Even comb that is slated to be culled can be pressed into service. If needed to fill out a box, frames in the outermost positions can be bare foundation.

If you notice swarm prep, add more frames of drawn comb to the brood nest. Supering early, with drawn comb, ensures that any incoming nectar surge has a storage place outside of the brood area, which helps avoid brood nest congestion.

An early start to comb building seems to help

By opening only the sides of the brood nest — cutting away about â…“ of the foundation sheet, then centering it within the frame using propolis — you create space at the outer edge, which triggers wax-making.

When done about three or four weeks before your peak swarm season, this technique releases some drawn combs to be added to temporary boxes and prompts an early start to comb building, which may discourage a colony from swarming. The bees will react to the open space and build out comb, filling out the frames, making new cells for new brood, and reducing crowding within the brood nest without chilling the existing brood combs by separating them from each other. 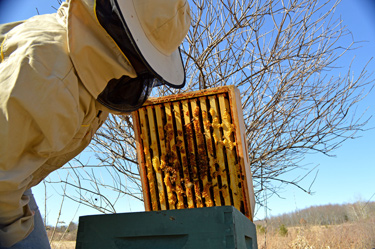 Swarming is the bees’ decision to split the colony — but if you split it yourself, you can control the process and satisfy their urge to reduce the population density in spring. Splits can be made as soon as either commercial mated queens are available, or the local area has enough drones to mate with new queens. Keep in mind that drones take at least 12 days longer than queens to become sexually mature.

There are a few basic splitting methods. You can use a double screen board and split the colony vertically, separating the queen from most of the younger bees — the bees that she’d take with her in a swarm. Other methods include walk-away splits, queen cell splits, and purchased queen splits. All of these methods divide your bees and some brood into two hives.

When a beekeeper wants to avoid preemptively making additional colonies, then close surveillance is needed. Keep double-screened boards available to make last-minute splits: While splitting early in the season usually keeps bees from swarming, only double-screened boards can provide the late-stage, age-class disruptions which can leave a colony unable to swarm.

Of course, using a double-screen board also makes a split, but if deployed at the last minute, at least you know there was no other alternative. If you wish, you can cull the resulting additional queen and reunite the two parts back into one colony.

Once you know how to anticipate and identify swarm preparations, you can attempt to stop the swarm. If you can’t prevent it, you can try to capture and hive the swarm. Browse our How to Be a Beekeeper Guide for other helpful articles and videos about beekeeping.