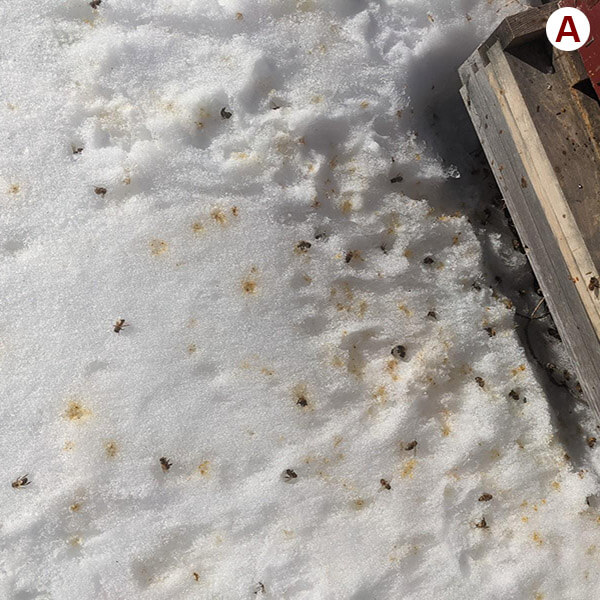 Beekeepers look forward to the first warm days of early spring: their colonies break cluster, begin house cleaning (going out on cleansing flights and removing their winter dead as seen in Photo A), and start coming and going again. Unfortunately, a hive with little to no activity at its entrance on warmer days may have perished over the winter. The best path forward with these colonies is to take the hive apart and do a necropsy, or a post-mortem exam of the colony, to figure out why your colony died.

A variety of different issues could have led to the demise of your hive, including:

Cause of death: varroa mites 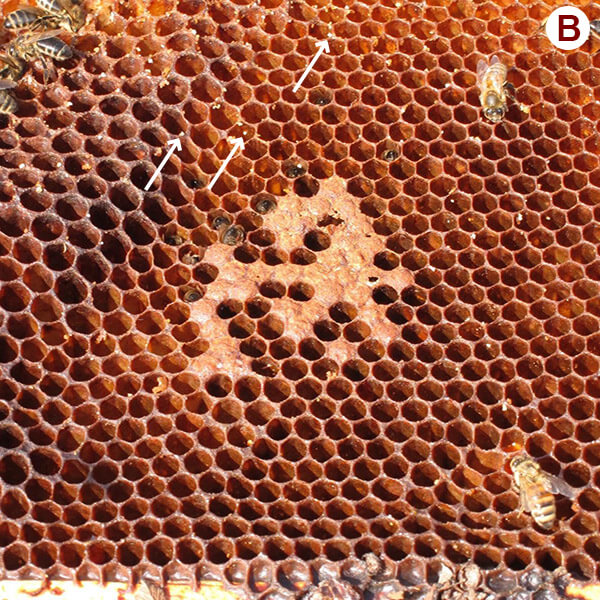 Varroa mites are a serious threat that affect all honey bee colonies. Even if you can't see them on your bees, mites live in every hive. The key is to keep their levels under control so that your bees can protect themselves against them and the viruses they carry.

Varroa can spread viruses such as Deformed wing virus (DWV), acute bee paralysis virus, and slow bee paralysis virus. These can contribute to a hive both starving and freezing, by shrinking the population until the cluster is too small to keep warm and move toward honey stores. Varroa-borne viruses interfere with the bees’ metabolism (ability to stay warm), immune response (ability to fight off these viruses), digestion, and hormone regulation (ability to grow and develop).

You might see the following in a hive that succumbed to varroa mites:

Cause of death: starvation

Starvation is a serious problem for beekeepers. Because honey harvesting generally takes place in the fall when the nectar flow is winding down for the year, over-harvesting and not leaving the bees enough stores for winter can be lethal. But even if you weigh your hives and ensure that they have ample stores to get through winter, unfavorable weather can lead to the colony eating upwards through all of their stores before the spring nectar flow begins, resulting in starvation. Frustratingly, even if there are full honey frames just inches away, the cluster usually only moves up and not side to side, so they can die without accessing nearby food.

You might see the following in a hive that succumbed to starvation:

Cause of death: moisture

It can be hard to tell whether moisture was the primary cause of death of your colony, or if the bees died due to something else first. A cluster covered in mold could signal death from excess moisture or death by something else (perhaps mites), and the moisture had accumulated and led to mold growth post-mortem.

Moisture is produced all winter as the bees eat honey and breathe out water vapor, so some level of it in the hive is inevitable. However, a healthy cluster usually manages moisture levels around itself. By adding a small vent at the top of your hive – either an open upper entrance or another kind of vent hole – you can usually prevent moisture from reaching dangerous levels in winter. After a cluster dies, no bee-powered ventilation is occurring, so the bees get a very wet look and soon begin to mold and decay.

You might see the following in a hive that succumbed to moisture:

Cause of death: freezing

With enough food and appropriate ventilation, a honey bee colony is very unlikely to freeze to death. Bees keep their winter clusters warm (above 80 degrees F in the cluster’s core) by eating honey. If the temperature falls, the bees simply eat more honey so they can generate additional heat. Unless the outside temperature somehow plummeted faster than the bees could increase their heat output, your bees will not actually freeze.

Cases of "freezing" in bee colonies can usually be more accurately described as cases of “running out of honey,” or "becoming too wet due to poor ventilation," or "being so weakened by disease that they could not keep their cluster warm." The freezing of the bees afterward is merely a symptom, not a cause of death.

Cause of death: Nosema 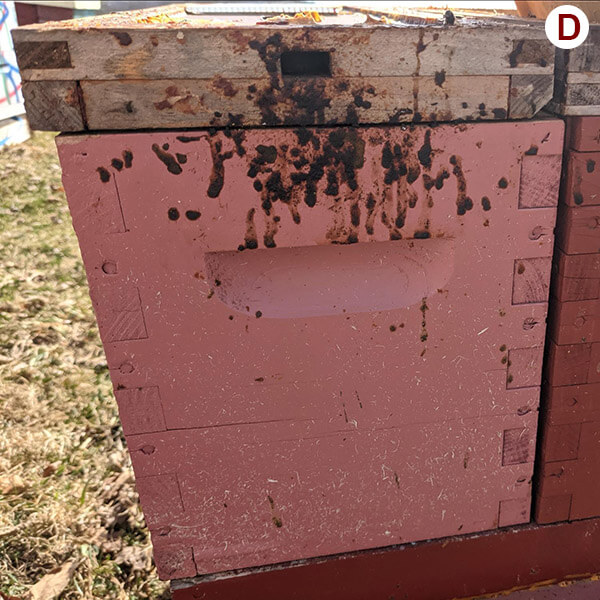 Nosema is a disease caused by a single-celled fungus. There are two types of Nosema that can affect a hive: Nosema apis, which gives bees dysentery, and Nosema ceranae, which does not. Symptoms generally emerge after a long winter confinement without the ability to make cleansing flights. It usually clears up when the weather gets nicer, but in some unfortunate cases can lead to a hive’s demise.

A treatment called Fumidil-B can be mixed with sugar syrup and fed to bees in the spring or fall (always follow label instructions exactly) to control Nosema apis, though such treatment may not be required if your bees have suitably nutritious food and are otherwise healthy. Fumidil can also be used to fight Nosema ceranae, but evidence suggests it may not be as effective against that species of Nosema.

You might see the following in a hive that succumbed to Nosema:

Like with any extra frames and boxes, be sure to store your woodenware so that it is dry and protected from mice, wax moths, 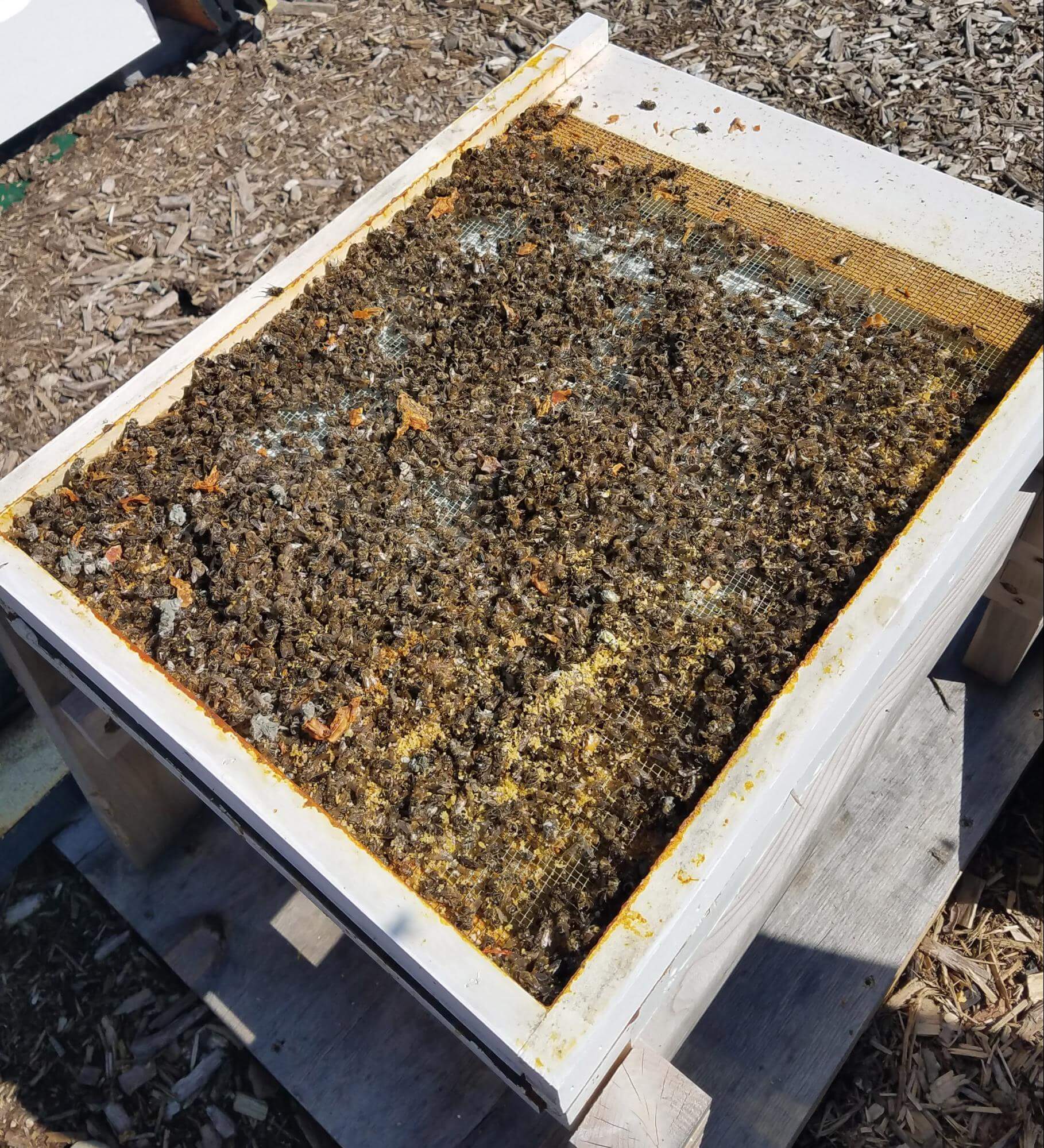 and other pests. You can use these frames and boxes to repopulate your apiary later in the spring. Bees are remarkably good housekeepers and can clean very messy-looking combs very effectively. The only exception to this is if you think your bees died from Nosema. Since the fungus spores can contaminate frames of comb, some beekeepers prefer to dispose of feces-stained frames to reduce the disease threat faced by their next colony.

By doing post-mortem checks to determine how your bees died, you can switch up your management techniques to prevent the same thing from happening in the future. By learning what went wrong, you can grow and become an even better beekeeper.