When you buy a package or have decided to requeen a colony, you will receive a queen in a cage from Betterbee. There are several different queen cages you might see holding the queen and her attendants. There is the 3 hole cage, the California mini cage, and the JZ-BZ queen cage.

While they appear different, they share the same basic design: the cages have space for the queen and attendant bees and a candy section to block them from escaping. When the cage is installed in a hive, both the attendant bees and the bees in the hive will eat the candy. It will take up to several days for them to breakthrough. During those days, the bees become acclimated to the smells of each other, and when the candy plug is cleared the queen will walk out as a member of that hive. 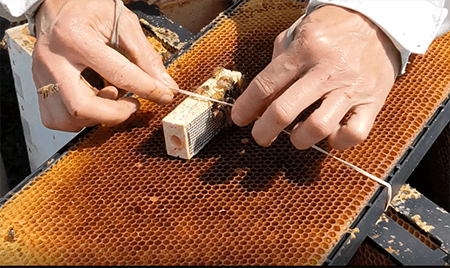 First, we need to decide where to put the cage. The best spot is between two frames that contain brood. With brood nearby, the pheromones work in the queen's favor and the bees on the brood tend to be younger nurse bees. In case of cold temperatures, the bees will cluster on the brood to keep it warm. If the weather drives the bees to cluster, the captive queen should be in the middle of that cluster. The queen cage should not be placed on the bottom board or in honey supers. These spaces are not filled with nurturing nurse bees, and if it gets cold the bees will abandon this area to cluster on the brood. The queen could be left to die in the cage.

If you are introducing the queen onto bare foundation frames, you will not be able to use the combs to support the queen cage. You will need to support the cage. There is a specially designed device built to accept and support various queen cage styles. You can see or buy it here. The more common way to support a cage involves using a rubber band or two. We show using a rubber band to hold the queen cage in our package installation directions. You could also use string or dental floss with tacks to support a wooden cage on a wooden frame. Just make sure your tack does not block the queen’s path out.

Next, consider that most hives allow a precise 3/8 inch "bee space" between frames. Queen cages can be much bigger than that, so you may need to leave a frame out while introducing a new queen. Avoid crushing the cage, screen first into comb that is already formed. The screen of the cage should allow the captive bees to communicate with the other bees in the hive. Also, be careful not to crush honeycomb that will drip and run into the cage. Liquids like honey or sugar syrup leaking from above can drown the bees in the cage, so make sure to position the cage to avoid such flooding.

If the candy is too hard, sometimes it helps to poke a pin or a paper clip through the candy. Some people do this as a matter of course when putting a cage in the hive. Most candy plugs are made up a year ahead of time, so we are not able to adjust when we find soft or hard candy plugs. If you do pierce the candy, be very careful that your tool does not go right through the candy and into the body of the queen! Humidity and warmth, plus bees using water inside the hive, contributes to helping the bees chew through the candy plug, even if it seems hard when you try to poke through it.

Sometimes, attendant bees will die inside the cage. If that happens, you don't want the dead bees to block the candy and the queen's ability to escape. Position the candy plug facing upwards so any dead attendants fall away from the candy.

Check back to be sure the queen has been released

After 3 days, check the hive to see if the queen has been released, and to remove the cage if she has. Some people might also open the cage to release the queen even if she is not out yet. If you take this route, hold the cage on the top bars as the screen or cork on the cage is opened, and cup a hand over her to shield her, then watch to see as she walks down into the frames. Others put her back in for another day or two and then check on her again. After a few days in the hive, if the hive's workers are no longer showing aggression towards the mesh that separates them from the "foreign" queen, they have likely accepted her as their own and she can be released by hand.

Introducing queens is not a technically difficult task, but there are some considerations that might make for better success rates. See the article Considerations for Success in Queen Introductions for further information.