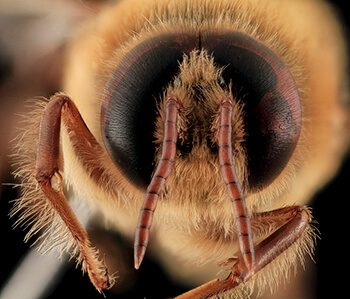 What is it like to see, as a bee? How does a honey bee see the world?

To begin, let's clarify just how many eyes a honey bee has. Sure there are the two big black "eyes" on either side of a bee’s face, but those are technically "compound eyes" - really a collection of many simple eye cells (individual lenses and light-sensing cells) that are arranged together so that a bee can absorb hundreds of independent images at once. The bee's brain stitches these images together to help them perceive their environment and move around within it. But bees aren't limited to those two compound eyes! Right in the middle of a bee's forehead, there are three little black dots that are also a kind of eyes, called “ocelli.” Ocelli cannot form a complex image of the world around a bee - instead, they are used by bees (most other flying insects, and some non-flying insects too) to detect light levels and movement, which help the bees navigate and maneuver as they fly through the air.

But what do bees see through all these eyes? Well, it's very similar to what we see through our own. They can form images of the world around them, and plan their flight paths based on what they see. One of the most important jobs of a honey bee is to collect food from flowers, and one great way to find a bright yellow dandelion in a green lawn is to scan the ground for the color yellow. John Lubbock, a 19th century English scientist, found early evidence that bees can see color when he trained bees to find sugar water by following scraps of different-colored paper. After a series of tests, Lubbock even declared that the "favorite color" of honey bees is blue. Perhaps the number of blue and purple flowers around the world can be partially explained by plants evolving to cater to the bees' color preferences?

Honey bees have excellent color vision, but many people are surprised to hear that bees can't see the color red. If we asked a bee to tell the difference between a black square and a red square, she would probably have a hard time doing it. That means that when your bees collect food from a field of red poppies, they aren't looking for "red," they're looking for the big "black" blobs rising above a sea of green vegetation! But don't feel bad that your bees are missing the red of your roses, because they can see something that we can't: ultraviolet light. Using an extra color receptor in their eyes, bees can see the complex and beautiful patterns of ultraviolet light that many plants make on their flower petals. Plants use ultraviolet to advertise their flowers directly to their pollinators and even communicate the best landing sites on each flower. A forager will learn the shape, color, and ultraviolet patterns of a particular flower species, and then focus on visiting just that species as long as it continues to provide high-quality nectar or pollen to her. 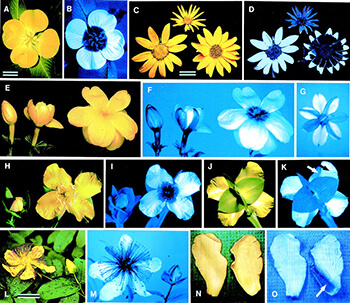 Photographs of "boring" yellow flowers become remarkable when the flower's ultraviolet coloring and patterns are captured and then digitally painted onto the petals in shades of blue.

Have you ever wondered why beekeeping equipment is made of white fabric, not black fabric? Have you ever tried working your bees while wearing black? If you have, you'll know that dark-colored clothing makes bees much more defensive than light clothing - perhaps because the dark color triggers some instinctual aggression, evolved over millions of years to protect bees against bear attacks? And since bees see "red" things as black, they may also treat red clothing the same way they treat black clothing. That also means that the varroa mites that we see as bright red are, from the perspective of a honey bee, cloaked in a stealthy black.

Seeing where to go

Bees also use vision to navigate. When a bee does her waggle dance to communicate the location of flowers, she bases the instructions on the location of the sun in the sky to orient her dance. She can only do that because her eyes can see where the sun is - and since bee eyes can see the polarization of light, she can even pinpoint the location of the sun through a thick layer of clouds! Bees also use visual cues and landmarks in their environment as part of their process of navigating back home. Some beekeepers put distinct landmarks (like plants, or different colored lawn flamingos) in front of each hive to help foragers return to the correct entrance and reduce the drift of bees from one hive to another. Reducing drift is a worthwhile goal since drifting bees can carry diseases from a sick hive into a healthy one.

Bees don't base all of their navigation on vision, however. To observe this yourself, you need only move your hive 10 feet away from its present location. Almost all of the bees out foraging will return to the hive's original location, even if that means flying directly past their own hive in its new location. Even when they discover that their hive is gone, few bees will be able to find it, even if it's clearly visible from the now-empty hive stand they're perched on. Thus, we can say with some confidence that a bee does not find her way home just by recognizing the color of her front door. Nonetheless, researchers have found that bees are less likely to drift into neighboring hives if those hives are painted different colors. So clearly vision is part of a bee's process for finding her way home, but they don't trust their vision enough to go look for their hive if a rascally beekeeper moves it in the middle of a bee's workday.

Scientists have spent a lot of time trying to figure out how bees navigate as they go about their foraging duties. How can a tiny insect fly multiple miles away from her hive, buzz around to collect nectar or pollen, and then make a "beeline" back home without getting lost? And then when she gets home, how can she dance to communicate the precise distance from the hive to the flower patch so that other foragers can find it? Scientists have tested bees by having them fly through tunnels and tubes painted with various kinds of stripes, and we’ve learned that bees partly measure distance by keeping track of the "optic flow" across their eyes. Bees that fly through more complex tunnels seem to think they've gone further because more visual information has gone into their eyes. Bees will also adjust their flight speed to keep the level of optic flow across their eyes constant, perhaps so that they don't fly too fast and crash into something in very visually complex environments. These complex experiments on bees have also taught scientists and engineers strategies to control flying drones using visual information.

A flight tunnel that will produce the illusion of a great deal of "optic flow" to a bee passing through it. Painting fewer red stripes, or painting them in different orientations, can change the behavior of the bee and may alter her perception of precisely how far she has flown. 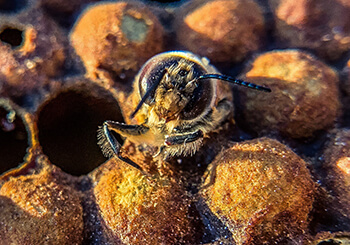 What about the boys?

If you've ever looked closely at a drone honey bee, you’ll have noticed that their head seems like it’s mostly eye, with two huge domed compound eyes that fill the sides and top of their heads. These eyes, and their particular position on the head, are what allow drones to see young queens on their nuptial flights, and then race to mate with them. Without those big, upwards-facing eyes, a drone would be likely to die a bachelor at the end of the season (or even sooner if he doesn’t see that dragonfly or barn swallow diving towards him!)

So the next time you sit in your apiary watching and enjoying your bees, remember that they're all watching you too. And the next time a bee lands on your hand and you make eye contact with her, consider the old saying:

"Beauty is in the eye of the bee-holder."