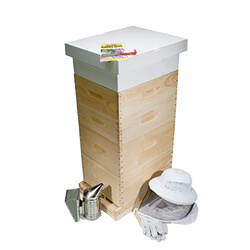 Bees raise their young (brood) in the boxes at the bottom of a hive. These boxes are known as brood boxes, hive boxes, or deeps (they are 9-5/8" deep). The nectar — which later becomes honey — is stored above the brood, and excess honey from the harvest is stored in the highest boxes, called supers. Many beekeepers use medium boxes for supers, as a medium box is only 6-5/8" in depth and therefore lighter weight when filled with honey. A few beekeepers use shallows as supers, which are even lighter.

Inside the boxes that make up the hive are combs of wax on rectangular wood frames. The standard size box is 10 frames wide, but Betterbee also offers 8 frame equipment. Typically, a honey bee colony begins in one deep box and expands to two deep boxes in the first year. These are the two brood boxes where the queen lays her eggs. In the second or third year, a beekeeper hopes the colony will create wax comb on all of the frames in four additional medium boxes, which are the honey boxes or supers.

Read on to learn about the types of bee hive kits and equipment Betterbee offers:

10 Frame Wooden Equipment has been the industry standard for over a century, and is still the most commonly used size of equipment in the U.S. 10 frame equipment has more space for bees, honey, and brood. A comparable 8 frame hive is taller and includes more boxes than a 10 frame hive.

8 Frame Wooden Equipment is lighter than 10 frame wood equipment. When full of honey, a full 8 frame medium super weighs 45 to 50 pounds; a full 10 frame medium weighs 50 to 55 pounds. Some beekeepers feel that a brood overwinters better in a taller 8 frame bee hive kit than in 10 frame boxes because the cluster can move up through honey stores more readily in a smaller 8 frame hive.

A growing trend among beekeepers is using all medium boxes in either an 8 or 10 frame hive. A medium is about 3/4 the weight of a comparable deep box. A beekeeper can use three medium boxes as a brood chamber, which is roughly the equivalent of two deep boxes.

Empty BeeMax equipment weighs less than its wooden counterparts, it’s easy to assemble (requiring only glue), and does not require winter wrapping. If you’re looking for lightweight equipment with a high insulating value, consider BeeMax hives.

*Substitutions for components of kits are welcome — choose your preferred items and give us a call if you don't see what you like online.