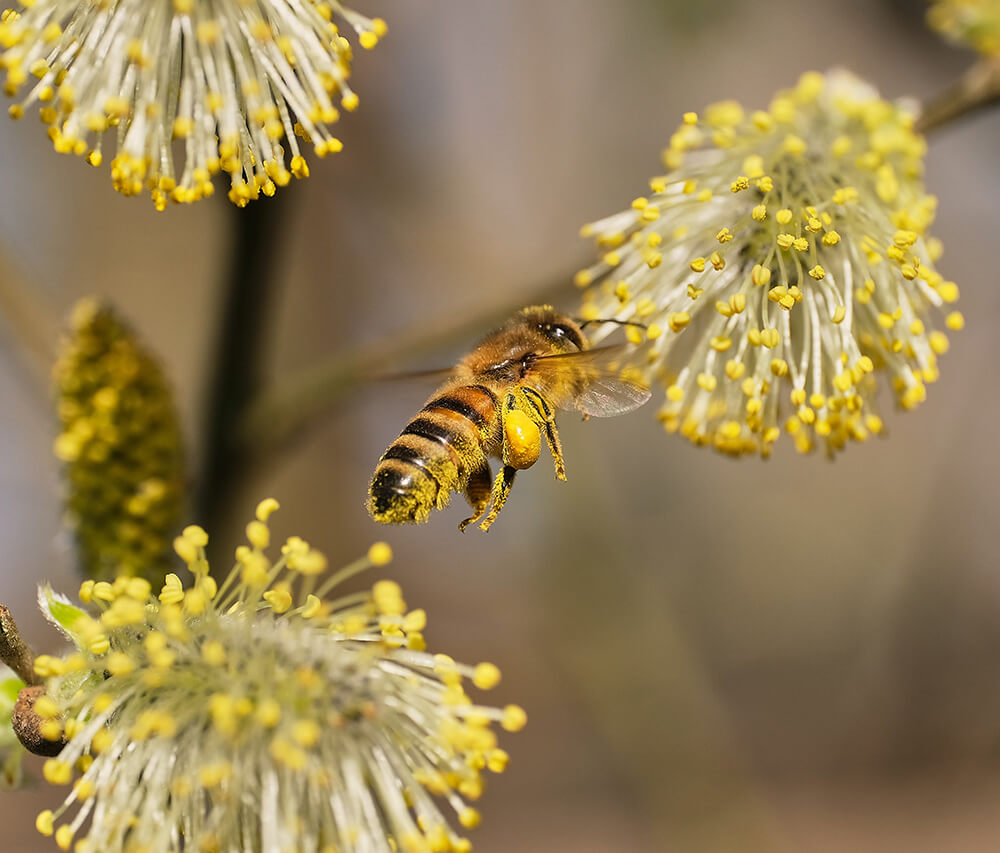 By Dr. David T. Peck, Betterbee's Director of Research & Education. Dr. Peck earned a Ph.D. in the Department of Neurobiology and Behavior at Cornell University, overseen by Professor Tom Seeley. After earning his doctorate, David continued to work at Cornell as a postdoctoral researcher, with a particular focus on varroa/bee issues in mite-free Newfoundland, Canada, as well as in Madagascar, where varroa mites were accidentally introduced only a few years ago.

Have you ever heard the claim that "according to all laws of aerodynamics, a bee should not be able to fly"? Supposedly, scientists and engineers have no equations to explain how bees remain airborne. The millions of flying bees in the world disprove the claim, but scientists aren’t sitting around wringing their hands over all these physics-defying bees! We actually have a very good understanding of how these amazing creatures take to the skies, and the remarkable wings of the honey bee have been very well studied.

The claim that bees "shouldn’t be able to fly" contains a nugget of truth: In 1934, two French entomologists did try to calculate how bees remain airborne, and at the time they were stumped. Antoine Magnan and André Sainte-Lague used aerodynamics equations based on the way an airplane flies, and they couldn’t figure out how the apparently random flapping of a bee’s wing could ever generate lift like a plane’s wing. The obvious answer is: It doesn't!

Instead, bees flap their wings at a constant rate of 220-250 beats every second. That's a lot of flapping, and it’s surprisingly fast for an insect the size of a honey bee. Unlike the way most other insects achieve flight, honey bees use a remarkably complex pattern of wing movements to generate lift. Why would they use such a complicated flight method? It could be related to the physical challenges a forager faces. A 100mg bee must be able to fly with a full load of nectar in her honey stomach (carrying an extra 60mg or so) but she also has to be able to fly with an empty "tank." Perhaps the more complex flight mechanics help to compensate for such dramatic weight differences?

Pop quiz: How many wings does a bee have?

A common misconception is that bees have two wings. Keen-eyed beekeepers will notice that their bees actually have four wings. The confusion is forgivable though because honey bees have a special set of hook-like structures on their wings that connect each back wing to the forewing in front of it. A bee’s many hamuli hook the left and right wing pairs together, allowing them to behave like two extra-large wings instead of four individual wings.

Sometimes old or ill bees will develop a symptom called "K-wing," where the front and back wings are not held together by the hamuli, and stick out from the side of the bee’s body at odd angles, like the two arms of a letter K. An occasional bee with K-wing is no reason to worry, but many bees with K-wing could be a sign that your bees have high numbers of tracheal mites. 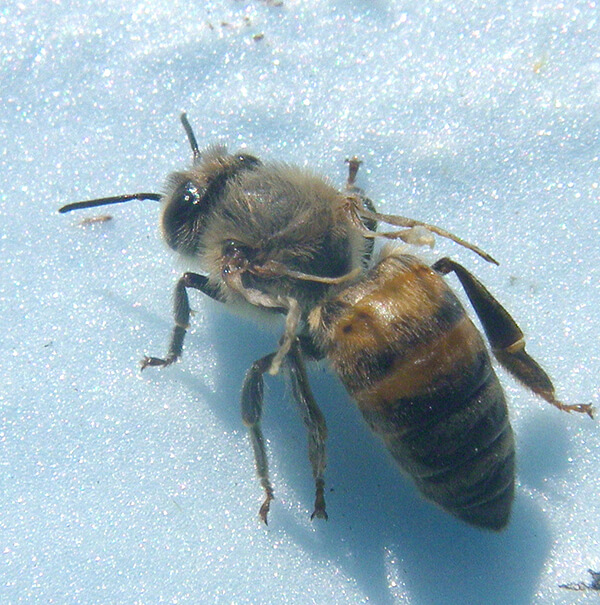 When a larva is capped and becomes a pupa, it has small visible nubs on either side of its thorax. As the pupa develops its organs and tissues, wing tissues develop inside these small nubs. Only when the bee is almost finished developing will fluid be pumped into the veins of the compressed wings, expanding them to full size and allowing the wing membranes to harden into their final shape. When an adult bee emerges from the capped cell, it should have four nicely formed transparent wings.

Above is what happens when wing development all goes according to plan. However, sometimes an adult bee will have visibly deformed wings, shriveled at her sides and useless for flying. The wing development process is delicate and sensitive, and it can go wrong for a number of reasons. Nutritional stress, temperature stress, or infection with a few different viruses can sometimes cause wing deformities. 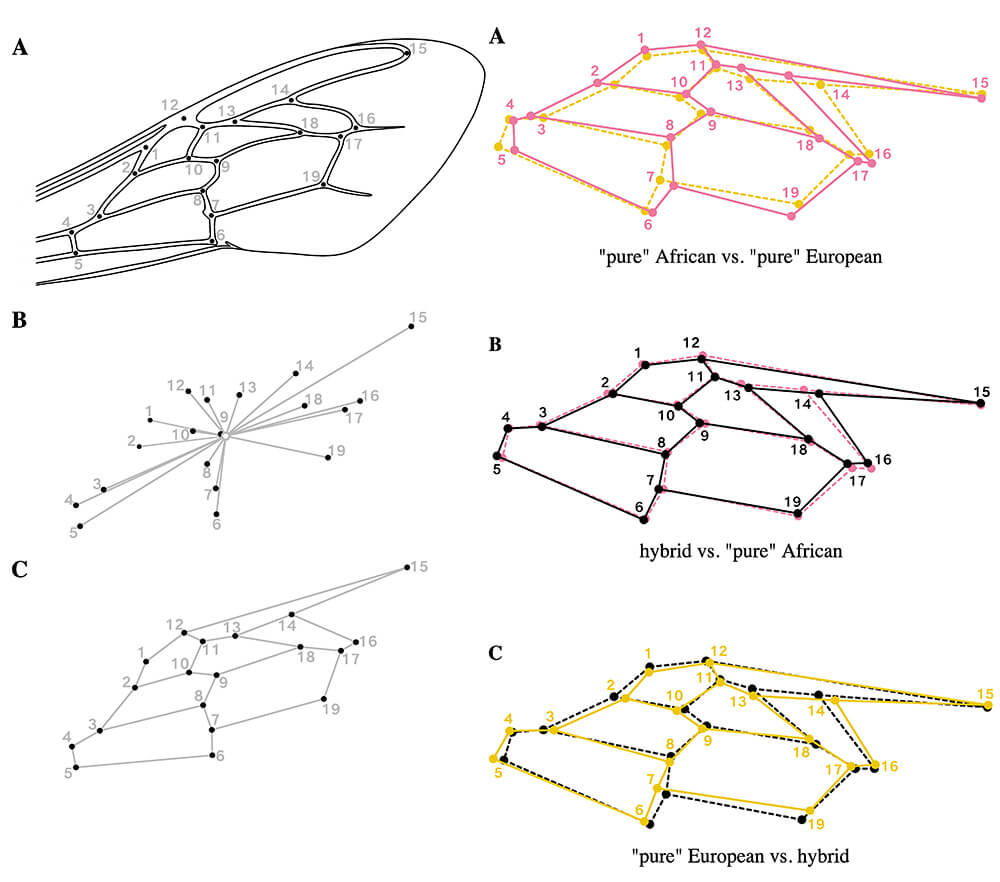 The subtle differences in the vein patterns of bee wings have been used by scientists to separate bees from different populations, lineages, races, and subspecies. For example, scientists can analyze the wing vein patterns in a population of honey bees from Europe, and the patterns in a population from Africa. They can map out the average distances between these veins, and then can create an average “European” wing and an average “African” wing. Then, by analyzing the wings of bees that are hybrids between European and African lineages, we can learn about the way that the African and European populations contributed to the hybrid bees.

Large flight muscles in the thorax propel worker bees for miles all around their home to collect nectar and other resources for the colony. Those same muscles power the bees’ wings as they fan the collected nectar to evaporate moisture and dehydrate it into concentrated honey. The honey is the fuel for the flight muscles all winter, as the bees buzz their flight muscles to generate heat and ward off the cold.

How can a winter bee born in October spend all winter buzzing her wings and not have tattered wings in the spring? It’s because honey bees have the remarkable ability to decouple the movement of their wings from the buzzing of their flight muscles! A winter bee’s flight muscles are burning calories and generating heat, but her wings don’t move at all until it’s time for her to take flight again. This adaptation lets the flight muscles do double duty as wing power and heating units, while allowing the bees to avoid unnecessary wear and tear to their four thin, complex, remarkable wings.